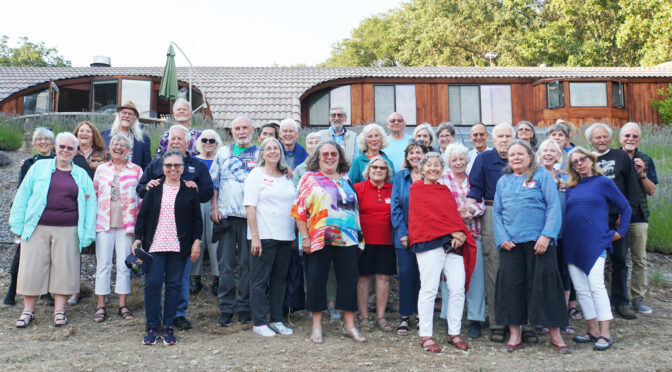 (What follows is an informal article on the recent Peace Corps Niger reunion, written by a former English teacher who likes to indulge himself by writing about interesting things. And this was really interesting! Please pardon me for errors and omissions. Corrections and additions are welcome! –Gary Steele, Niger RPCV ‘66-’69)

The Peace Crops Niger Reunion of August 2022 was fabulous! It was a long weekend of wonderful reminiscence, catching up, great times and memories of old times. (This was the sixth approximately quinquennial reunion in Santa Rosa since1991.)

Hats off to our incomparable hosts, Gayle and Bob Reid, who took so many extra measures to assure us a wonderful time, and they clearly succeeded. Was it the beautiful grounds and the gardens, or the patio and the terrace, or the oak grove and the architecture? The setting was superb, but the warmth of the hosts the real factor.

At least three reasons helped make the event Covid safer: Most of the time was spent outdoors, and even indoors there was significant cross ventilation. Secondly, many of us are trained in medicine/public health and well aware of dangers. And even those of us not in health fields are up on current events and know the importance of Covid mitigation. Lastly, the vaccination and boosting rate in our age cohort is extremely high, even higher in a well-educated subset like us.

Twenty-six RPCVs made it to the event, and many were accompanied by spouses and significant others for a total of thirty-nine. The weather was nearly perfect. Some evenings had just a bit of a chill. Daytime temps rose to the low 80s but not for long, and there was the very low humidity that the Sonoma is famous for. Above all, love was in the air, love for one another, for Niger, for myriad good causes, and for having some fun.

Greetings in Kanouri, Housa, Djerma, and French were heard here and there. Stories about old Peace Corps experiences were shared. An example is the experience of sitting down to supper after a long day of heat and work, and then suddenly grabbing plates to run inside as a dust storm sprang up. There were endless tales of latrine woes. Many stories about snakes remain quite vivid. We heard some long-forgotten words like Petromax and Braduni. It is remarkable how much great progress Niger has made in areas such as vaccination rates, child survival, food production, literacy levels, and miles of paved roads. And then there are the ways where so much more needs to be done.

We gave updates on what had happened to us over the years since Niger, of how our Peace Corps time had inspired us or intensified what we wanted to do in life. And it was remarkable how things we had once taken seriously now seem trivial, e.g., some college course no longer mattered as long as the grade was acceptable.

There was near unanimity on the pitiful state of current events, at the local, state, national, and international level. There weren’t many happy stories to bring up.

Now the food was so much better than in our Peace Corps days! It was wonderful, though the conversation was so great that at times we barely stopped to eat. We feasted on salads of many types, enjoyed barbecue and pastry, not to mention tres leches cake! The list goes on. And the two West African ladies who catered on Saturday fixed spinach and pumpkin seed stew, jollof rice, and roasted goat. Oh my!

How about some credit to the good folks who coordinated with Gayle and Bob and did things to make this reunion such a great one?

A big shout out to Norma Hyatt who served as executive administrator and registrar supreme.

She was ably aided by Robert Porter as bouncer for all events, day and evening, to keep the group from becoming too rowdy and exceeding Sonoma County noise limits.

Guy Immega developed a wonderful repeating photo loop with photos of our colleagues who have passed.

This was complemented with a memorial table of additional pictures of all types that Cathy Sharp assembled. Cathy and Guy’s skill and sensitivity helped bring those who are no longer with us back in spirit.

Guy also took any number of pics at the event, casual shots of large groups, small groups, individuals, and then the group photo in front of the fragrant lavender planting. He has generously shared all this on the evite site for the event. And lest we forget, there will be those wonderful mini-interviews that were taped and will be forthcoming.

Penni St. Hilaire assumed fiduciary responsibilities, doing her high-pressure fundraising undercover to keep our hosts from protesting. The total we all chipped in to give to Gayle and Bob was impressive, and they can do with it as they wish. Just a bit of that total was used to have a grand bouquet delivered to their home on Winter Creek Road a few days after the event.

Less formally, Shelly and Jacob Leib were the probable winners for coming the greatest distance to the event — all the way from boiling, muggy South Florida to dry, cool Northern California.

Buck McAdoo was at least a contender for the prize of most varied conversational topics. His topics spanned from sailing to mushroom foraging intemperate rainforests.

Not to be left out is Odessa Reid, a four-footed new addition to the Reid family. This little pup, just six months old, already excels in manipulation skills, scouting around under tables for fallen morsels, and in getting her belly rubbed. She was the runaway favorite for the prize of most beautiful ears!

All are invited to submit nominations for other prizes, such as, perhaps, sampling the most California wines, or losing a cell phone most frequently, paying the most for rental car, or fumbling to find the right rental car back along the driveway under the oaks. Self-nomination is encouraged.

All present served on subcommittees for table busing, bottle uncorking, dishwashing, beverage re-suppling, ice totting, etc. etc. We were a pretty good bunch in terms of pitching in on all sorts of duties.

If this reunion was different, it may have been in greater sharing of grandchildren pics on cell phones. After all, some of us do have more grandchildren now. And then there were prolonged “organ recitals” among us. This type of “organ recital “was the kind that takes place when geezers get together and start describing their gallbladder operations, pacemaker insertions, etc. These recitals were supplemented by “joint recitals,” which had particular emphases on replacements of various joints.

Several people where shamelessly exposing themselves, or at least their knees, to show the patterns of patella scars left after knee replacements. Continuing in the medical vein, many of us are no longer sporting glasses after having lens implants related to cataract operations. Oh, and there were numerous dental implants.

And as if to prove that we are not just a bunch of near-octogenarians, we showed ourselves thoroughly up-to-date. We flaunted our Wordl skills! Yep, and David Ikeda won another prize, sort of, by having Wordl-worthy first AND last names. And if there was a special waiver to allow cheating and adding proper nouns, then let’s add Sahel, Housa, Jerma, Dosso, and Niger! Great minds think alike. Often. Maybe. Sorta. Right? (If this paragraph evades you, go googleWordl!)

The discussions of the films, books, and movies were terrific, and as a group, we have very refined tastes, as in “simply the best!” Thanks to these interests, an idea surfaced to send out a very simple monthly email, something like “Arts for the Astute of Peace Corps Niger.” It would consist of some mini-reviews of good TV shows, films, and books. The reviews would be submitted to the co-editors of the email in advance each month.

And so the search is on for a couple co-editors who would want to implement this idea and come out with a pilot email maybe in September. Estimated time needed would be maybe three or four hours a month. Warning! This is not search for people with ideas on how this monthly email should be done. Rather it is for people who will just do it. (Co-editor candidates contactgarysteele9876@gmail.com.)

It was bittersweet as individuals and couples gradually started to drift away on Sunday, walking down the oak-lined driveway and waving goodbye. Many would agree that we had not had a weekend like this since before the pandemic. A fabulous time was had by all!