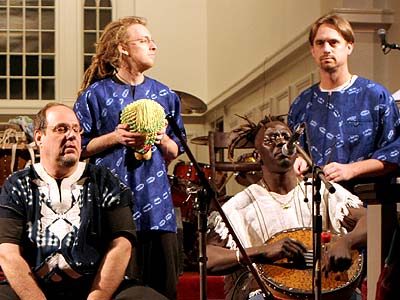 After reading about the food crisis in Niger, Sheri Kennedy, a Niger RPCV currently working as a professional artist in the Boston area, was inspired to create a painting as a fundraiser. “The painting is done from a photo of my villagers outside Dossey, north of Birni n’Konni”, Kennedy says, “and is called Tilling the Soil, Dossey, Niger.”

High-quality giclée reproductions of the painting are available for $40 (plus shipping). Approximtely $10 of the proceeds of each print will be forwarded on to Oxfam. “The more prints are ordered, the more the printing costs drop, and therefore the more will go to Oxfam. Please pass this along to anyone you know who might be interested in buying art to feed Niger.”

Prints can be ordered at Sheri’s Art-Think web site:

FON has begun a campaign to reopen the USAID mission in Niamey. Please see our letter to Andrew Natsios (the USAID administrator), then contact John Soloninka (FON’s president) if you want to get involved in our efforts.

Ingrid Patetta, a filmmaker residing in New York, recently returned from the Abalak region in the northern Tahoua department. She has produced an excellent 7-minute video on behalf of Tagaste, a small NGO that is trying to bring the current plight of Tuareg nomads to the world’s attention. She is making the film available on the Internet, and she is interested in partnering with Friends of Niger around the U.S. to organize public screenings of the film to raise funds for Tagaste’s work with the people of Abalak, many of whom have yet to receive assistance in the year-old food crisis.

We encourage all to view the video, then contact Ingrid for more information.